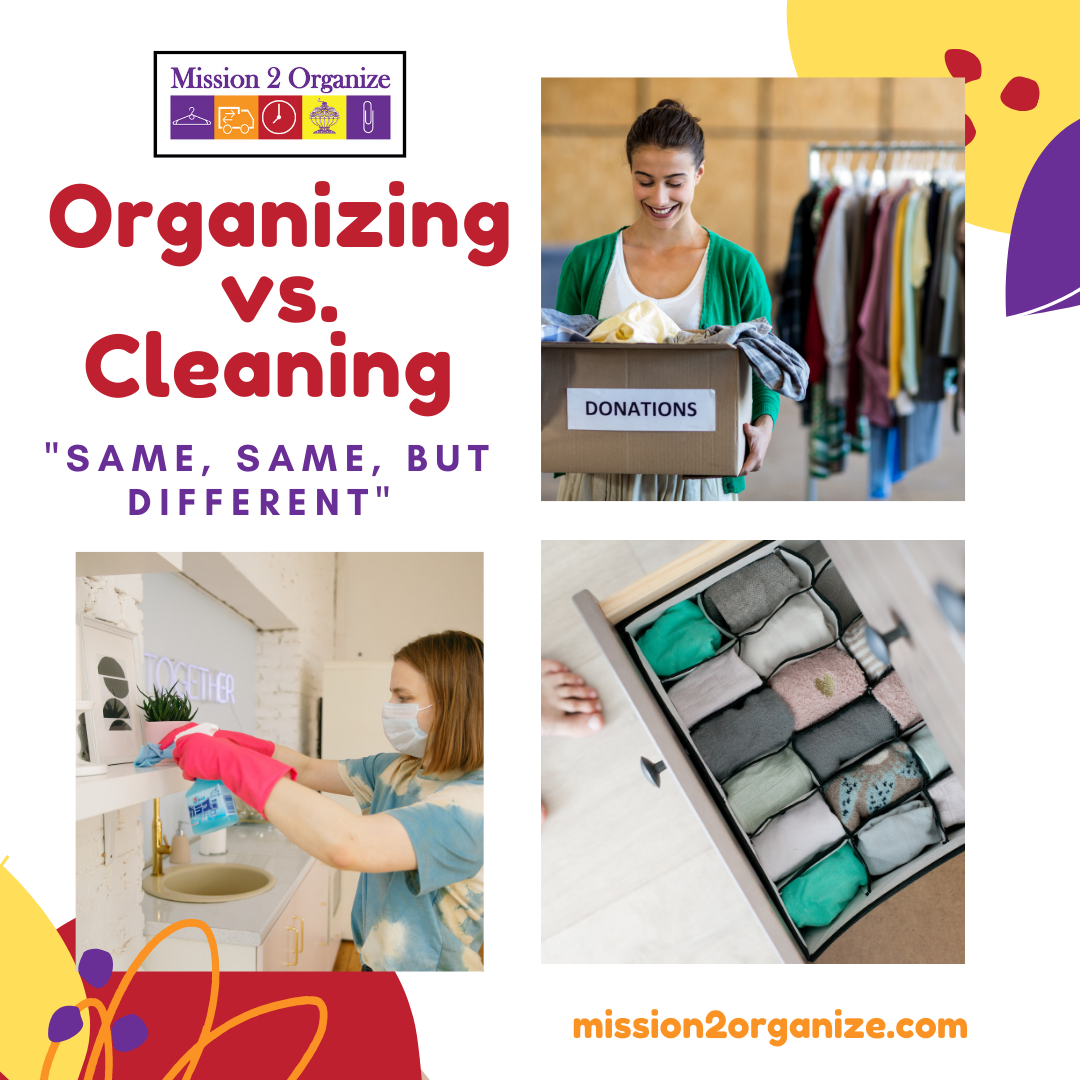 “Same, same, but different.” It’s a saying well-known throughout Asia when trying to compare two items that may seem similar, but have small variations, or differences, between them. In the organizing world, it’s a perfect way to describe the ever confusing controversy between organizing and cleaning.

While the two words are often used interchangeably and seem to have some overlapping commonalities, they really aren’t the same.

According to the dictionary, to organize means to “arrange into a structured whole; order” while to clean means “to be free from dirt, marks, or unwanted matter”.

Let’s take a look and see how organizing and cleaning are the “Same, same, but different”.

Both are essential. You can have a sparkling, clean house that is cluttered and crammed with stuff and, at the same time, you can have a home with everything in its place that has layers of dust covering every hard surface and crumbs littered across the floor. But to have a home that stands out above the rest, it’s important that you not only organize but clean your space. In doing so, you have the best, and healthiest, of both worlds.

Both require effort.  As the saying goes, “It only works if you do”.  While it would be great if there were a magic wand that you could wave to bring order and cleanliness to a space, sadly, there isn’t. In order to have a home that is organized and clean, you have to put forth the effort by decluttering, sorting, containerizing (yes, that’s a word!), dusting, sweeping and mopping. It may be hard at first, but the results are always satisfying.

Both can bring less stress and more joy. It’s not uncommon for people to feel better when a space or their home is clean and/or organized. The smell of lemony furniture polish and the ability to see a surface that had been previously cluttered with papers can bring a smile to anyone’s face.  As no one ever said, “I regret getting my house clean and organized.”

Now that we’ve seen the similarities between organizing and cleaning, let’s look at how they differ.

The tasks themselves are not the same.  As mentioned above, when someone is organizing they are letting go of items they no longer want, need or use, sorting like items together to make it easier to find them, and utilizing containers to offer boundaries for their stuff.  On the other hand, cleaning might include a determined routine or checklist that includes dusting the furniture, sweeping and mopping the floor, wiping down countertops or emptying the trash.

** Don’t have a set routine or checklist for cleaning? No problem! Download our FREE Cleaning Checklist at the bottom of this post, which includes our favorite cleaning products and 2 cleaning routines for you to use! **

One usually comes before the other. While no one knows which came first, the chicken or the egg, there is no set rule about which must be done first, cleaning or organizing. However, at Mission 2 Organize, we’ve found that it’s best if you clean after you’ve organized.  It’s much easier to remove dirt and dust from a surface once you’ve emptied it of any unwanted clutter. It’s also simpler to vacuum the carpet after you’ve sorted, organized, and put away the clothes that have been lying on it for long periods of time.

While there is no hall monitor to ensure that you are using the correct term when referring to either one of the two tasks (organizing or cleaning), it can help to know how they are alike and how they differ so you get the best results. And if you still aren’t sure which one you need to be doing, feel free to give Team M2O a call. We offer both services and would love to help you bring order and cleanliness to any space!

And don’t forget to download our FREE Cleaning Checklist to make cleaning your spaces a breeze!

How can knowing that organizing and cleaning are the same, but different affect how you approach the two tasks?

Back to School: Tips for Organizing Inside and Outside the Classroom